“All of my life I’ve spent trying to learn how to produce living structure in the world. That means towns, streets, buildings, rooms, gardens, places which are themselves living or alive… depending on who you talk to, they’d say, ‘Well, this stuff Alexander’s been discovering is a lot of nonsense. There is no such thing as objectivity about life or quality.’ ... They are simply mistaken.”

Christopher Alexander (1999)
Abstract:
Living structure is a physical phenomenon and mathematical concept, through which the quality of buildings or artifacts can be judged objectively. Living structure is to beauty what temperature is to warmness. Just like a tree, a living structure has two distinguishing properties: “far more small things than large ones” (so called scaling law) across all scales from the smallest to the largest, and “more or less similar things” (so called Tobler’s law) on each scale. Living structure can be only generated in some step by step fashion by two design principles (differentiation and adaptation) through the 15 structural properties.

1. Introduction
If the life’s work of Alexander (2002–2005) – The Nature of Order– had to be summarized in one word, “beauty”, “life” and “wholeness” would be the three top candidates. If allowed two words, it would be “living structure”. What do these terms really refer to? Instead of getting into their detailed meanings, let us use an analogue to clarify them first. If wholeness were compared to temperature, then beauty or life would be like the feeling of warmness or coldness. The higher the temperature, the warmer one feels, and the lower the temperature, the colder one feels. The higher the wholeness, the more beautiful or the more life one feels; the lower the wholeness, the less beautiful or the less life one feels. Therefore, a thing or structure that exhibits a high degree of wholeness is called a living structure. Opposite to living structure is non-living (or dead) structure.

To know whether a thing or space exhibits living structure, one can simply examine whether it possesses “far more smalls than larges” across all scales ranging from the smallest to the largest. For example, at the multiple levels of scale or in a recursive manner – an entire tree, its branches, and its leaves (in terms of the detailed texture) – there are always “far more smalls than larges”. Therefore, a tree is beautiful or alive structurally, regardless of whether it is alive biologically.

A simple shape that lacks of detailed smaller structures is neither beautiful nor alive. This is for the same reason why sans-serif fonts are less beautiful or less alive than serif ones. For example, the font “I” (when shown as a sans-serif) is not a living structure (one vertical line only) without “far more smalls than larges”, whereas the font “I” (when shown as a serif) is a relatively living structure (one vertical line and two little bars) with “far more smalls than larges”. The difference between the non-living and living fonts may be hardly sensed when the two fonts are too small, in particular when the letter’s meaning is focused on. As a matter of fact, serif fonts in general are objectively more beautiful than sans-serif ones.

This article is intended to make it clear why living structure is beauty’s temperature. More specifically, the essence of beauty is structural or objective, lying in the notion of “far more smalls than larges”, which accounts for a majority of our sense of feeling on beauty. There is a clear sign that beauty is beginning to be accepted as an objective concept in the literature of philosophy (Scruton 2009).  Beauty is not just in the eye of the beholder as once held, but exists in living structure. The phenomenon of living structure is universal and pervasive, not only in nature but also in what we made and built across all cultures, ethics, and religions, involving ancient buildings and cities, as well as ancient carpets and other artifacts.

2. Living structure by two examples
Alexander first described the idea of living structures in a corner of an English country garden, where a peach tree grew against a wall:

“The wall runs east to west; the peach tree grows flat against the southern side. The sun shines on the tree and, as it warms the bricks behind the tree, the warm bricks themselves warm the peaches on the tree. It has a slightly dozy quality. The tree, carefully tied to grow flat against the wall; warming the bricks; the peaches growing in the sun; the wild grass growing around the roots of the tree, in the angle where the earth and roots and wall all meet.” (Alexander 1979)

In this living structure of the garden corner, there are many interconnected living centers, such as the wall, the peach tree, the sun, the bricks, the wild grass, the roots of the tree, and even the garden. This is a very good example of Alexander’s miniscule observations on nature and on our surroundings. 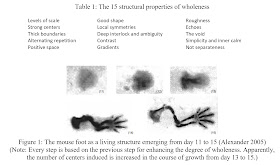 Considering another example of embryogenesis, a growing mouse foot is a living structure that comes from continuous differentiation and adaptation (Figure 1, Alexander 2005). In the course of the step-by-step development of the five days, many of the 15 structural properties (Table 1) can be observed, such as strong centers, thick boundaries, gradients, levels of scale, contrast, local symmetries, and finally, good shape of the whole.

3. Living versus less-living structure
A simple comparison can help to prove that the modernist architecture and design usually fail to create living structure, whereas traditional buildings and designs are usually living structures. Two building façades and all their identified centers are shown as individual polygons (Figure 2). The cathedral façade contains over 500 centers, whereas the modernist one contains only a bit over 50 centers. From these two numbers, we can judge that the left is more living than the right. Secondly, the cathedral façade has six hierarchical levels indicated by the six colors, whereas the modernist façade has only two levels represented by blue and red. In addition, all of the blue pieces on the modernist building façade are exactly the same size, so look boring without any variation. There is little doubt that the left is more beautiful or living than the right.

Let’s further look at the two logos of University College London (UCL) (Figure 3). The new logo (http://tiny.cc/jpgxaz) was adopted in 2005, but it is far less-living than the old one (http://tiny.cc/81gxaz). The old logo has at least 19 centers, which hold five hierarchical levels (Figure 3a and 3b), whereas the new logo has a maximum of six centers, which can be put at only two hierarchical levels: the five centers as the figure, and the one center as the ground (Figure 3c and 3d). In fact, two of the six centers are a bit too small to recognize when the logo is small enough. It is clear that the old logo is more living or more beautiful than the new one. Even by assessing the three letters U, C, L, we can conclude that the old one is more beautiful or more living than the new one, based on the fact that serif letters in general have more centers – thus more beautiful – than sans-serif ones. To this point, the more-living and less-living logos can really be said to a fact rather than an opinion.

4. Summary
Living structure as a physical phenomenon and mathematical concept help people to understand objective or structural nature of beauty. It is a mathematical structure of physical space, which is able to reflect in our minds psychologically: the more living the structure is, the more beautiful one feels. Beauty and ugliness can be clearly defined by scaling law; that is, a structure with a flat hierarchy – with maximum two levels of scale only – is objectively considered to be ugly, whereas a structure with a steep hierarchy – with at least three levels of scale – is objectively considered to be beautiful. By claiming objective or structural beauty, our intention is not to deny idiosyncratic aspects of beauty, which account for only a small proportion of our feeling. This dominance of the objective over the subjective can be compared to any statistical regularity with a majority of agreement, such as an r square value of 0.75 instead of 1.0. In addition to the hierarchy or scaling law, Tobler’s law plays an important role in the objective or structural beauty as well. As one of the two laws of living structure, Tobler’s law – or the notion of “more or less similar” – recurs on each level of scale. The true meaning of “more or less similar” is neither “completely same” nor “completely unique”, but something between the same and the unique. These two complementary laws work together, governing living structures, with the scaling law being primary, and Tobler’s law being secondary.

Acknowledgement
This paper is a shortened version of the open-access paper (Jiang 2019), originally published by the journal Urban Science (MDPI: https://www.mdpi.com/). This research was funded by the Swedish Research Council FORMAS through the ALEXANDER project with grant number FR-2017/0009.